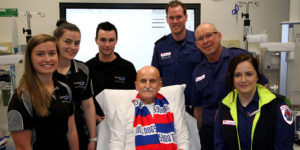 Western Bulldogs supporter Rob McCarthy woke up to the news of his team winning and that he had just survived a cardiac arrest. Ambulance Victoria

Western Bulldogs fan Rob McCarthy has more to cheer about than his beloved team winning the AFL grand final. He woke up to the news that he had just survived a cardiac arrest which he suffered whilst barracking at the Melbourne Cricket Ground (MCG) on match day.

With 10 minutes to go to full time, 60 year old Rob suffered a massive heart attack. Without a sound, Rob was seen to stiffen in his seat and remain still.

Thankfully an off-duty paramedic, who was close by, recognised the severity of Rob’s condition and began to perform CPR. Fellow spectator, Jim Ingram, described the scene to the Herald Sun

“I was shocked by the ferocity of the paramedic’s actions as he pounded Rob’s chest — it was nothing like we see in the movies. As the minutes ticked by and as the game continued, as goals were kicked and the fans roared, the stranger from the crowd continued CPR until he was exhausted. Then another off-duty medic took over as the first guy slumped to his haunches, entirely spent.”

Minutes later, a public access defibrillator was brought to the scene and was used to shock Rob’s heart back into a normal rhythm.

Paramedics arrived and continued the care. Minutes later a roar went up. It was not as a result of the Swans or Bulldogs kicking a goal but for Rob making a miraculous recovery at the scene.

“When Rob suddenly sat up, blinked and looked around, the roar that erupted from within our small group was extraordinary. If the ’G had a roof, it would’ve been blown clean off. And when he gave us a thumbs up, we were jumping, cheering, hugging and crying. We must have looked mad to any onlookers”, Mr Ingram told the Herald Sun.

Rob’s story highlights the fact that the MCG continues to be one of the best places in Australia to have a cardiac arrest. Wassertheil et al;  2000 study revealed an extraordinary survival rate of 71% of cardiac arrests that occur at the “The G”. This is compared to a national average of just 5-10% for casualties that collapse in the general public. The secret to the success – a strong chain of survival marked by early CPR and early defibrillation. Casualties receive CPR within two minutes and defibrillation within five.

Since his ordeal Rob has been thanking the first aiders that were at the ground to help him out. ‘They all saved my life. It’s emotional, I can’t describe it…I am a very lucky guy and I love them all.’ he told Ambulance Victoria.

Rob has now become a champion for people to learn first aid and for more Automatic External Defibrillators (AEDs) to be made available in the community. “A defibrillator saves your life. Businesses should start getting defibrillators and teach people how to do CPR.”

If you’d like to learn how to provide CPR or use a defibrillator that could save someone’s life like Rob’s, come and join us at one of our upcoming First Aid courses. We have a number of courses coming up in both Taree and Port Macquarie.

The course was very interactive. It was a good balance between theory and practical. The information given was relevant and the assessor was friendly and knew the course material well.

The course was very interactive. It was a good balance between theory and practical. The information given was relevant and the assessor was friendly and knew the course material well.
https://www.coastalfirstaid.com.au/testimonials/wendy-silva/

Coastal First Aid made this process an easy one! Thank you.

Coastal First Aid made this process an easy one! Thank you.
https://www.coastalfirstaid.com.au/testimonials/megan-guy/
4.8
5