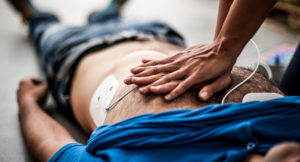 Have you ever thought about the power that completing a first aid course, can provide you?

A news story published in the Sunshine Coast Daily this week recounted a great story of a successful resuscitation of a drowning victim at Sunshine Beach, Queensland on November the 5th. The story was told through the eyes of a mother and daughter who were enjoying a lovely day on the beach, just sitting on the sand, when suddenly they noticed two surfers dragging an early 20’s female, who wasn’t breathing, from the water. They watched as another surfer ran up the beach to grab a phone to call for an ambulance. They watched others beginning to provide CPR to the casualty. The mother’s response was to turn her daughter away so she wouldn’t have to witness what she expected to be a fatal tragedy. They then watched lifeguards and paramedics arrive on scene to provide further emergency care which ultimately culminated in the young woman’s survival.

Whilst we are in no way attacking the actions of the mother and daughter on this occasion or arguing what they should or shouldn’t have done, it does remind us all of an all too common occurrence. That is, the situation where someone is unfortunately injured or falls ill, say at home or out in public, and there are people at the scene who could help, but they don’t or perhaps they fail to provide the adequate care that the casualty ultimately needs. These are the spectators, the people that can watch an emergency unfold before them, but never act – even if the life of that casualty is slipping away before their very eyes. Perhaps they feel powerless to help. Perhaps other lack the confidence to act when they truly need to. Some may feel they don’t have the necessary First Aid skills or knowledge to be of any use. 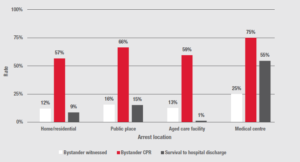 Proportion of adult OHCA cases (age≥16) which were witnessed by a bystander,
received bystander CPR, and survived to hospital discharge among adult OHCA cases
(age≥16) where resuscitation was commenced by SJA WA paramedics, in WA in 2016. Source: ST John WA Cardiac Arrest 2016

Recent cardiac arrest statistics from Western Australia highlight some telling truths. Of the 2451 out of hospital cardiac arrests that occurred in the state last year (2016), the vast majority of them (72%) occurred in a home or residence. Thus, if you’re going to go into cardiac arrest, it’s most likely that you are going to be doing it at home. The statistics also revealed that of the cardiac arrests that were witnessed by someone in that home, only 57% of the time did someone actually get in and start providing CPR to the casualty. That is, the chance of someone actually helping you at your home, when you stop breathing is little more than a flip of a coin.

Now obviously there can be a whole range of factors that may be influencing this figure but this overall low percentage is quite sobering. You would think that if you suffered a cardiac arrest at home, the ones around you are more likely to be family and friends and in turn, they would be more compelled to provide CPR to you than say, a random member of the public. However, that is unfortunately not the case and the inverse holds true. The statistics published reveal that you are actually more likely to get the CPR you need if you suffer your cardiac arrest out in public. Not only that but you are actually more likely to survive as well, with higher survival rates to hospital discharge than those that occur in a home. 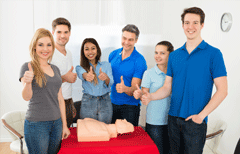 Thankfully First Aid courses do have the power to turn some of these statistics around. Whilst it may be hard to influence where you suffer your cardiac arrest, we can certainly improve the chance of someone receiving the care they need. First Aid courses can empower people to act in an emergency when they otherwise may not have acted. With the skills and knowledge you acquire through completing a first aid course, you can gain the ability to act. Additionally, these courses can equip you with a certain level of confidence that will provide you with the will to act and assist. First Aid courses can literally turn you from a being a spectator to a resuscitator to perhaps even be a life saver.

This is a call to action. If you haven’t completed a First Aid course recently, now is the time to complete one! We run regular First Aid courses in Port Macquarie and Taree that you can come and join us at. We also run First Aid courses for business and community groups in these towns and all across the Mid North Coast (including Forster and Kempsey). To join us simply check out our upcoming First Aid courses or contact us for group booking options.